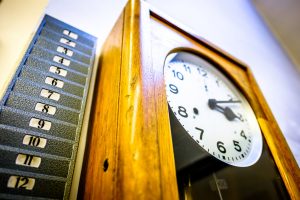 In a recent case, Federación de Servicios de Comisiones Obreras (CCOO) v Deutsche Bank SAE, the European Court of Justice (“ECJ”) has held that in order to comply with the EU Working Time Directive (“the Directive”), employers must have a reliable and objective system of measuring actual daily time that  their workers have worked.

This is a decision which could have a significant practical and financial impact on employers wanting to avoid the potential for action against them by the Health and Safety Executive and so we wanted to share our views on the steps we would advise employers to take in response to the case.

The facts of this case were that a group action was brought by a number of Spanish unions against Deutche Bank, claiming that it was under an obligation to set up a system which measured working time in order to comply with the Directive.

This arose following concerns about whether the bank was meeting its requirements in respect of providing the minimum periods of daily and weekly rest periods, together with ensuring that workers were not working more than an average of 48 hours in any seven day period. Whilst Deutche Bank had in place a computerised system that recorded absences such as holiday and whole day sickness absences, it did not measure actual time worked or the amount of overtime worked.

The ECJ ruled that in order to ensure the effectiveness of the rights provided by the Directive, employers must provide an objective, reliable and accessible system which records the time worked by each worker so that it can be measured.

The Implications for Employers

The Directive was translated into domestic legislation as the Working Time Regulations 1998 (“the Regulations”). It states that employers must keep and maintain general records which show the working time for all workers that have not opted out of the 48 hour week and that the limits to night working have been complied with.  There is no obligation to keep records in respect of rest breaks or of time actually worked each day. This means that the Regulations do not fully implement the Directive and the UK government has not yet stated how it proposes to rectify this matter and it is also not yet entirely clear what impact Brexit may have on all of this.

In the interim, national Courts and Tribunals will need to apply the judgement. However, action cannot be bought by individual workers. Action can only be brought by the Health and Safety Executive (“HSE”), who can then fine an employer or ask it to take other remedial action. The current view is that the HSE is unlikely to take action before giving an employer an opportunity to rectify the position and so the current repercussions on employers may be minimal.

Notwithstanding the above, our view is that it would be useful for employers to start thinking about implementing systems which record the actual time that their workers work so as to be seen to be complying with the Directive and observing their health and safety obligations to their workers.  We would urge employers to look at how to record time and to ensure that they have an effective and objective system in place which records the actual hours worked by their workers and this information should be easily accessible. Employers should also ensure that any processing of such data is compliant with the Data Protection Act 2018